Read THE BOX UNDER THE BED for FREE!

I just enrolled in KDP Select on Amazon, so for all you Kindle Unlimited people, you can now read THE BOX UNDER THE BED for FREE! Limited time, as I'm just trying out KDP Select and don't know if I will re-enroll when the ninety days are done. You must be enrolled in the Kindle Unlimited program to read the book for free. That's a paid program through Amazon. If you do read the book and enjoy it, please leave a favorable review. This is a book of poetry and short fiction. Thank you, everyone! 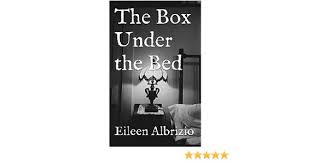 The Box Under the Bed

Haunting tales and tidbits pulled from under the bed. These compelling little poems and stories explore the dark side of the human psyche and the ghostly side of life.

Posted by Eileen Albrizio at 1:12 PM No comments:

I Know What Happens, but Why?

Spoiler alert, not that many will need one as most of you likely have already read this story. But I didn't. So, here it is.

I just finished reading Shirley Jackson's short story The Lottery. Yes, I know. Many of you read this when you were in junior high, but for some reason the Catholic School I went to didn't think this was appropriate reading, so I never had the advantage of all that dissecting that was offered in sixth grade English class. I know what happens in the end--and here's the spoiler--every year a random lottery "winner" had to be stoned to death by the entire community in the town square. But what I don't know is why? Furthermore, I don't know why Shirley Jackson wouldn't fill us in on that. I mean, isn't the motive an essential part of the story?

I've read some analysis on this, but not of it makes sense, as it seems to all be speculative. Even Shirley Jackson had trouble explaining her intentions. Responding to complaints, she told the San Francisco Chronicle in 1948, "Explaining just what I had hoped the story to say is very difficult."

Even the scholars who translated the meaning had to decipher code throughout the story to come up with an explanation. I understand why the story is revered, as its shock value alone is worthwhile. But as a writer and a reader, I am always disappointed in stories that end on a speculative note. Simply put, I as the reader don't want to have to do the work of the writer. I would love to know what you think. 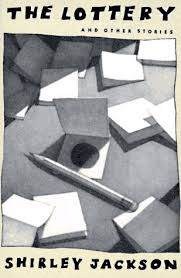 Posted by Eileen Albrizio at 1:35 PM No comments: